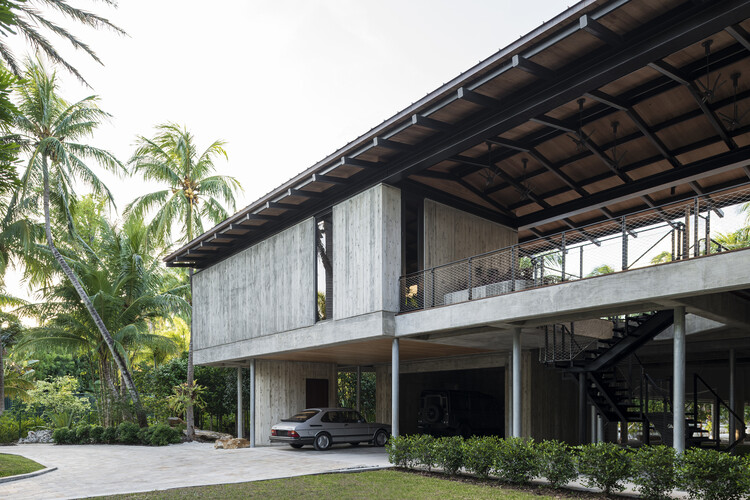 After Brad Herman went through Hurricane Irma in 2017, he knew it was time to build something new. His original 1923 home — located on a canal just 900 feet from Biscayne Bay in a desirable South Coconut Grove neighborhood — had sustained significant damage from hurricanes and tropical storms, beginning with Wilma in 2005, just months after he purchased the home. Each time, it took months to return to normal, getting the insurance straightened out and repairs completed.

As FEMA’s flood insurance caps the payout to $250,000 in building coverage (a relatively small amount to repair significant structural damage to a home); it became a matter of patchwork over time and simply no longer worth the effort. Herman, now a prominent surgeon in town, sought out the architecture firm Brillhart Architecture to build a new residence on the same site.

Located within Miami’s most extreme flood zone (VE) – where projects must have their first floor raised on stilts 12′ above sea level (an entire story) – this project was designed specifically to respond to hurricanes, and storms surges, flooding, and sea -level rise. With the Stewart Avenue Residence, Brillhart Architecture sought to fundamentally re-think how to elevate/enhance the architectural design of elevated residential structures by 1) embracing the understory space as a fundamental and celebrated aspect of the architecture; 2) reconstituting a new ground plane in the sky and 3) breaking up the massing to make the building less imposing and more tropical.

As a result, people have been taking notice of the project since it broke ground. “It just doesn’t look like anything else in Miami, and the details and materials and thoughtfulness of the design are at the level of the PAMM museum. Now that it is complete, I have someone knocking on my door at least one-two times a week to ask me if I would consider selling. I’ve even had people who came to look at other houses in the neighborhood stop and say that they want to buy my house instead.” says Herman.

While raised structures are not new (think coastal communities across the US with homes raised on telephone poles), the “house on stills” design strategy is becoming a pre-condition for building on the waterfront as we face the escalating realities of climate change. The typical construction basically picks up a house that looks like it belongs on the ground and drops it on top of a series of columns, without regard for a design either on the ground floor or the habitable space above.