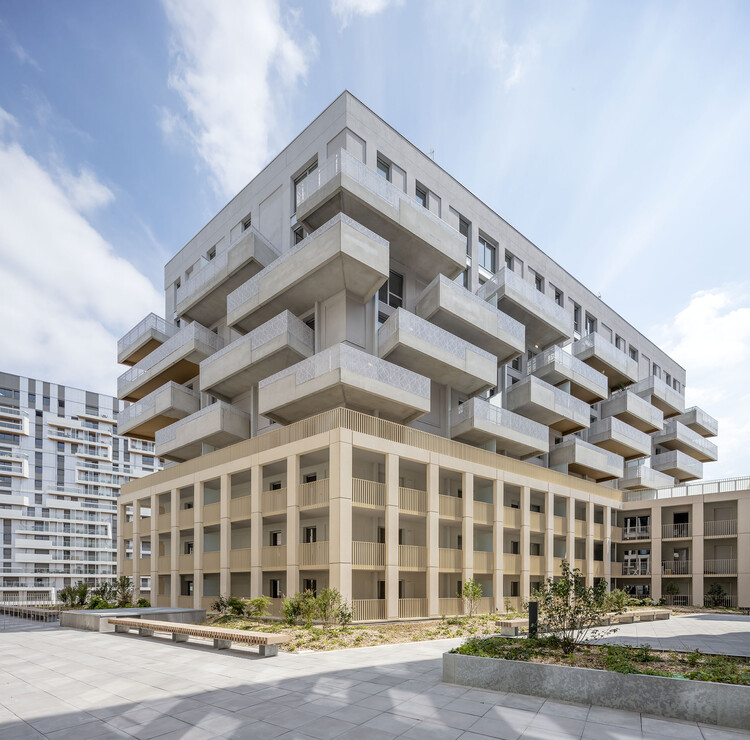 A new centrality. The Armagnac sector is today a huge railway wasteland and a sector of activity at the heart of which a new centrality for the city of Bordeaux is developing. Overlooking the Place d’Armagnac, the Tri Postal block, as its name suggests, includes the city’s former mail sorting building, whose activity stopped in 2016.

Now divided into three bodies, it will be refurbished in part by CoBe. Right next to this symbolic building, CoBe took part of the design of the first phase of the block coordinated by ECDM agency: a mixed-use building complex composed of housing units and offices standing on a shared two-story ground floor. Within this complex, CoBe oversaw the design of the two towers located at the extreme east of the plot and their respective parts of the shared base. They are lots L1 and L2 of the project.

Two buildings. The base of all the residential buildings respects the same framework, composed of a post-beam structure on two levels of the ground floor and long loggias on the façade of the first four floors.

While keeping the same massive thicknesses of concrete slabs, the two ten-story housing buildings L1 & L2 stand out visually from their neighbors by disturbing their linear and horizontal appearance thanks to a set of staggered balconies. The created effect of solids and voids energizes the façade, breaking with the pronounced horizontality of the base and the strong expression of its post-beam grid, and divides the balconies between covered and uncovered spaces.

On the façade side, the shades fluctuate between a sandy prefabricated concrete of «blond stone» color at the base and loggias putting in mind the hues of the Bordeaux’s traditional facades, and a light gray concrete for the upper levels’ balconies, combined with aluminum joinery and a gray coating.

The balconies’ railings are made of perforated aluminum following a reinvented traditional Bordeaux pattern and are sometimes interrupted by a set of concrete parapets that are continuously extending the slabs. The undersides of the balconies are subtly embellished with patterned concrete with gold lacquer.

Dwellings, loggias, balconies. The two buildings, served by two separate halls, are made of 33 social renting housing units and 44 free-to-own housing units ranging from one-room to five-room, equally arranged on all levels. The top two floors host duplexes containing double-height living rooms. The double ground floor hosts commercial premises and car parks on two levels, as well as cellars provided for each of the dwellings.

As the project is entirely designed on the edge of the plot and has no public spaces, all the dwellings have large exterior spaces of an average of 10m2, whether balconies or loggias. The residential buildings are the same width as the neighboring office buildings (20.5 meters), as their volumes have been cut into the mass to create two-meter-wide outdoor spaces on each façade.

All the dwellings enjoy views of Bordeaux’s landscape and do not suffer any overlooked situation with other dwellings.